ReMix: Weapons of Our Warfare: Faith 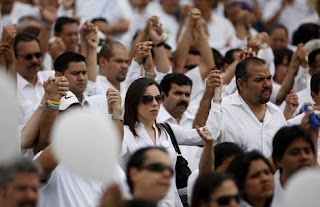 Marchers united for peace in Monterrey, Mexico
Still fighting the good fight.
I'm foolish enough to believe in a sense that I was saved (and maybe even buried a bit) by Calvinism. While watching others succumb to the pressures of being anything they wanted to be, I was free to believe in my own depravity - that no matter how hard I tried, I wouldn't amount to anything that God didn't design for me from before the beginning of time.
Of course, with age comes an appreciation that not everything is so black and white, so clearly delineated between evil and good, between obvious sin and definite salvation (and often the things you assumed to be obviously good turned out to be nebulously nefarious).

Just as human nature is neither completely good nor bad (nor, and this is central to this entire series, is any one human completely good or evil - although it may appear that some have fully lost their humanity), so the issue of faith is not the same one that I grew up on, nor that Martin Luther was so sure it was. Luther and some of his Reformation brothers reacted to the excesses of the Catholic Church of the time by considering faith as the antithesis of works. Solo fide*, they argued. You need nothing else to be in God's good graces.

I would argue that although that my be true as far as receiving grace, being a citizen of God's Kingdom (or a Christ-follower, however you want to pose it) encompasses work. And hard work. Fact of the matter is that faith and works are inseparable.

Lemme post an example from another prominent reformer, the OTHER Martin Luther:

King ponders for a few moments what it would be like to spend time in Ancient Egypt, Greece, Rome, in the Renaissance, at the forefront of the Reformation, during the Emancipation, and by the side of FDR. But then:

Strangely enough, I would turn to the Almighty, and say, "If you allow me to live just a few years in the second half of the 20th century, I will be happy."

Now that's a strange statement to make, because the world is all messed up. The nation is sick. Trouble is in the land; confusion all around... But I know, somehow, that only when it is dark enough can you see the stars. And I see God working in this period of the twentieth century in a way that men, in some strange way, are responding.

Something is happening in our world. The masses of people are rising up. And wherever they are assembled today, whether they are in Johannesburg, South Africa; Nairobi, Kenya; Accra, Ghana; New York City; Atlanta, Georgia; Jackson, Mississippi; or Memphis, Tennessee -- the cry is always the same: "We want to be free."

And another reason that I'm happy to live in this period is that we have been forced to a point where we are going to have to grapple with the problems that men have been trying to grapple with through history, but the demands didn't force them to do it. Survival demands that wegrapple with them. Men, for years now, have been talking about war and peace. But now, no longer can they just talk about it. It is no longer a choice between violence and nonviolence in this world; it's nonviolence or nonexistence. That is where we are today.

I can remember -- I can remember when Negroes were just going around as Ralph [Abernathy] has said, so often, scratching where they didn't itch, and laughing when they were not tickled. But that day is all over. We mean business now, and we are determined to gain our rightful place in God's world.

Faith is hope with legs. Biblical book of Hebrews (via Eugene Peterson's The Message translation) tells us, "The fundamental fact of existence is that this trust in God, this faith, is the firm foundation under everything that makes life worth living. It's our handle on what we can't see."

Christian faith isn't sitting around and intellectually agreeing or disagreeing with some sort of random (and weird) "fact." Nor is it arguing with someone who agrees with different "facts" than you do. It also isn't fancy feelings. And it certainly isn't about self-determinism.

True faith, like true religion, according to Jesus' brother, the respected Elder James works it out:

Dear friends, do you think you'll get anywhere in this if you learn all the right words but never do anything? Does merely talking about faith indicate that a person really has it? For instance, you come upon an old friend dressed in rags and half-starved and say, "Good morning, friend! Be clothed in Christ! Be filled with the Holy Spirit!" and walk off without providing so much as a coat or a cup of soup—where does that get you? Isn't it obvious that God-talk without God-acts is outrageous nonsense?

I can already hear one of you agreeing by saying, "Sounds good. You take care of the faith department, I'll handle the works department."

... You can no more show me your works apart from your faith than I can show you my faith apart from my works. Faith and works, works and faith, fit together hand in glove.

It's good to have hope - to have a reason to press forward in our battles - but then we must act on our hope. Saying that "I believe that the homeless should be taken care of" will not take care of the homeless. Enacted faith says that, "I believe things can change for the better. And these are ways in which I have acted in that hope."

Faith is also - contrary to modern, Western thought - communal. The one in faith does not walk alone, but shares the burden of the struggle with others who do not always have the same perspective, but can add extra input and aid to a more well-rounded perspective. The result, if properly executed, is rewarding, refreshing, reinvesting, redeeming, creative, creating, and invigorating.

So is our beautiful but messy, hard but shared work resting squarely in faith.
*Remarkably, but not so much for me, I originally wrote, Solo Fido. That, I'm afraid, is more of a pet-land controversy...
Written by jasdye at 4:00 PM